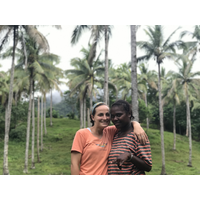 As I was getting to know my new community on Erromango, they were getting to know me too. We were both finding things about each other that were surprising. And I was finding island life fascinating.

-I felt my first earthquake while eating dinner with my host family one night. Afterwards, my family told me about a time after an earthquake when there was a tsunami warning and the whole village carried mats up and slept on the top of the hill in the bush. The headmaster also told me that after an earthquake during mango season, the kids run to the mango trees to collect the fruit that falls from the trees.

-It is always very exciting whenever ships come to our island, usually about once a month. The whole village gathers around and sits on the beach to watch as they unload everything. At one point, every store in the village and surrounding villages was out of sugar and rice, among other things. When the ship finally came with them, everyone was so excited to eat rice. Kids didn’t want to eat the yams and food on top of their rice, just the rice. Most recently, a ship dropped off a brand-new boat one of the chief’s sons was buying. And as partial payment for the boat, he put a cow on the ship as it headed back to the capital.

-The Ministry of Agriculture dropped off tons of small potatoes for planting and showed the village how to plant them in June. When I first arrived, everyone pointed out their potato gardens, and explained it was the first time they’ve ever planted potatoes here. Even the school has two potato gardens on school grounds that the students work on during “working bodies,” the hour a week of school time allotted for school chores and cleaning up the school (the students digging up the potatoes at the school is pictured below). Just recently, all the potatoes were ready to be harvested. Four different families have given me bags of potatoes. Several people have asked me for tips on making French fries (even though they’re a big part of the American food culture, of course I’ve only ever bought them so I wasn’t very helpful). The diet here consists of a lot of starches: yams, manioc, sweet potatoes, and taro, so at first I didn’t understand the excitement about potatoes. But even though they’re similar to the other starches, with the limited food variety, I too have been really enjoying the potatoes. On Tanna, the unofficial Capital of our province (Tafea, the southern-most province) they grow a lot of potatoes and sell them to New Zealand and Australia. Some people may sell some potatoes next round, but this first harvest everyone is just eating them.

- Gladys, my youngest host sister, came to my house one day excited to show me her new cell phone and to ask me if I could help her make a Facebook account with it. I was shocked she suddenly had a phone. It requires an expensive flight or long boat trip to get to the capital city of Port Vila, the only place in Vanuatu where there are stores that sell technology and solar energy systems for charging them. Gladys explained that a salesman for TVL, one of the two cell phone providers, came to our island selling phones and phone credit and our papa bought a smart phone for each of his daughters (my oldest brother already had one and the other is only four). When I saw my papa later that day, I jokingly asked him where my new phone was, since I’m his fifth daughter. He laughed and said my host sister Larisa convinced him to get her a phone for all the work she does for the family around the house, in the garden and at the store. Then one by one, my other sisters used every trick in the book to convince him to get them one too.